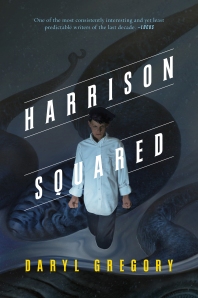 This Lovecraftian adventure came out Spring, 2015 in hardcover from Tor Books in the US, in trade paper from Titan Books in the UK, and in audio from Audible.com. Excerpt on Tor.com.

And why not try out the interactive companion story / adventure game, Harrison Squared Dies Early!

Harrison Harrison—H2 to his mom—is a lonely teenager who’s been terrified of the water ever since he was a toddler in California, when a huge sea creature capsized their boat, and his father vanished.  One of the “sensitives” who are attuned to the supernatural world, Harrison and his mother have just moved to the worst possible place for a boy like him: Dunnsmouth, a Lovecraftian town perched on rocks above the Atlantic, where strange things go on by night, monsters lurk under the waves, and creepy teachers run the local high school. On Harrison’s first day at school, his mother, a marine biologist, disappears at sea. Harrison must attempt to solve the mystery of her accident, which puts him in conflict with a strange church, a knife-wielding killer, and the Dwellers, fish-human hybrids that live in the bay. It will take all his resources—and an unusual host of allies—to defeat the danger and find his mother.

: “Gregory’s versatility as a writer is almost as impressive as his plotting and character work; Harrison and his friends, family and foes (both mundane and deeply weird) are a joy to follow, and the setting here is vivid and deserves some return visits. … Harrison Squared is a fantastic, fun, and gripping book, as suited to adult readers as it is to younger ones; hopefully in addition to expanding his range, Gregory follows up on this particular story because readers will be craving more.”

Kirkus:  “Most readers will grin at Gregory’s deft, spiky parody of high school. For the rest, it’s a tale handled with confidence and control, with loads of salty, piscine atmosphere, but it’s perhaps a little too self-consciously reminiscent of Lovecraft or Clark Ashton Smith. Superior, with plenty of crossover teen appeal.”  (full review)

Booklist: “Yes, there’s a whole lot of weirdness going on in Dunnsmouth, and danger is everywhere, as Gregory’s nicely imagined story amply demonstrates…. Give this one an E for eerie.”

BiblioSanctum: “I had a great time with this book. It’s not a heart-pounding tale of horror, but rather a well-paced delectable mystery that’s also a fun adventure filled with lots of unexpected twists and turns, while exuding an eerie vibe. (Full review)

“Harrison Squared takes old time boy’s adventure fiction, throws in a soupçon of the Nancy Drew, Hardy Boys mystery hour, and recklessly dumps it all into the briny, boiling cauldron of Lovecraftian horror. The result is nothing less than splendid.”
—Bill Willingham, New York Times bestselling author of Fables and Down the Mysterly River.

“Harrison Squared gave me the feeling of reading an eldritch Harry Potter. With tentacles! I definitely rooted for the cast of likeable characters caught up in a very strange world indeed. And the ending hints at more adventures on the way. . .”
—Carrie Vaughn, New York Times bestselling author of the Kitty Norville series 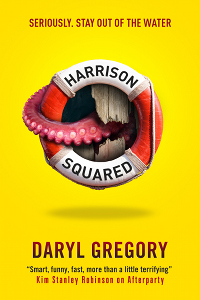 “Harrison Squared is sweet, creepy, touching and horrifying. If you locked H.P. Lovecraft, Judy Blume, and Louis Sachar in a run-down seaside cottage for a couple of months, this is what they’d produce.”
—James Cambias, author of A Darkling Sea.

“Harrison Squared is a strange, wonderful read. The isolated seaside setting is beautifully crafted, and the prose is at once eerie, foreboding and funny. Lovers of the weird, and of things from the briny deep will find much to appreciate.”
—Kendare Blake, author of Anna Dressed in Blood and Mortal Gods