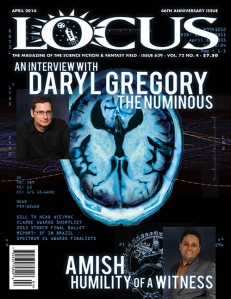 So the April issue of Locus is out, and I’m on the cover, next to my brain. That’s an angel hiding in the hemispheres, for all you folks who doubted my angelic nature.

Okay, maybe it’s not my brain. The Locus website has an excerpt from the interview, in which I talk about neuroscience, my family, Afterparty, and other things I’ve written.

The issue also has two reviews of Afterparty (snippets below). I’m a lucky man.

Russell Letson: “This is a real science-fiction crime thriller: the old evils and insanities are all there, given new twists by the double-edged blades of science and technology. And, like the best crime and SF novels, those moral and philosophical questions linger, after the mere whodunnit puzzles have been solved.”

Faren Miller: “Well before Afterparty concludes with ‘The Parable of the Faithful Atheist”, it’s clear that Daryl Gregory continues to be one of the top writers in a field where literature works alongside adventure–and both forms benefit from the exchange.”