I have become the road warrior. I have a Rollie. I have a backpack heavy as spent uranium. And I am not stopping until Furiosa drags my carcass back home in three weeks.

The main part of the tour kicked in this week, first with a visit to the Tattered Cover in Denver on July 5. Knopf put me up in the Brown Palace Hotel, which at first sounded like a mixed message, kinda like the Beige Taj Mahal, but was in fact a beautifully fancy 120 year old hotel. My pal Alistair Kimble stopped by ///before the show, and we had a nice steak dinner. Don’t tell Alistair’s wife, because they’re vegetarians at home.

And then the signing and reading, hosted by Derek Holland of the Tattered Cover. This was the Colfax Ave store, which is huge, and is in a building that was once a theatre. I did the reading and a little cutlery bending, which was fun.  Then Alistair, who looks better in a fedora than anyone I know, took me too a local speakeasy called… The Speakeasy. The cocktails were quite fine.

The next day, Alistair gave me a tour of where he works. Did I mention that his day job is being an FBI agent? Yeah, he’s that cool. Alistair is his pen name. His first book,co-written with Eric Flint, is coming out in the fall.  It’s called Iron Angels, and it’s already on Publishers Weekly’s list of Top 10 SF, Fantasy, and Horror books for fall. 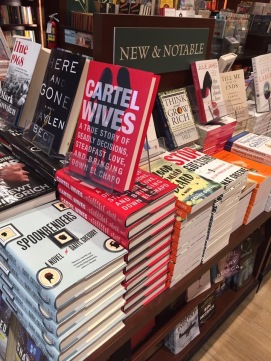 After the tour,it was north to Fort Collins for an appearance hosted by Old Firehouse Books. The latter took place in the Old Town Library. It turns out–and I did not know this until I got there–that by statue, every building in Fort Collins has to start with the world “old.”

I got to meet lots of great people who’d been reading my books, including one guy who came with all the Planet of the Apes issues I’d written–I signed ’em all. My friend Barb Sebek, whom I hadn’t seen since high school, came out, and afterward we had locally brewed beers and talked about the musicals we’d been. Barb had the most beautiful voice in Hinsdale South High. Now she’s a professor of English at Colorado State, focusing on the 16th and 17th century, and definitely does not need to brush up on her Shakespeare. She’s the expert.

That last picture in the mosaic was taken on my way out of town, at the Denver Airport. Spoonbenders was sitting in the Tattered Cover airport bookshop. I’d never had a book in an airport shop before, so was able to scratch that one off the bucket list.

Now I’m in Tampa, in a very nice area of town. I’d say that Tampa’s main export was humidity, except that none of it seems to leave the area. I’ve got tomorrow off, and then Sunday I read at the Oxford Book Exchange. More later!